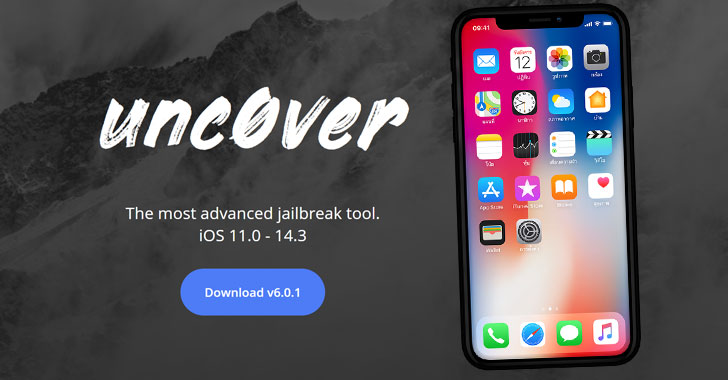 A popular jailbreaking tool called “unc0ver” has been updated to support iOS 14.3 and earlier releases, thereby making it possible to unlock almost every single iPhone model using a vulnerability that Apple in January disclosed was actively exploited in the wild.

Tracked as CVE-2021-1782, the flaw is a privilege escalation vulnerability in the kernel stemming from a race condition that could cause a malicious application to elevate its privileges.

“We wrote our own exploit based on CVE-2021-1782 for #unc0ver to achieve optimal exploit speed and stability,” Pwn20wnd said in a separate tweet.

The vulnerability has since been addressed by Apple as part of its iOS and iPadOS 14.4 updates released on January 26, 2021, but not before admitting that the issue may have been under active attack by bad actors.

The iPhone maker, however, did not disclose how widespread the attack was or reveal the identities of the attackers actively exploiting them.

Jailbreaking, similar to rooting on Google’s Android, involves a privilege escalation that works by exploiting flaws in iOS to grant users root access and full control over their devices. In doing so, it allows iOS users to remove software restrictions imposed by Apple, thereby allowing access to additional customization and otherwise prohibited apps.

For its part, Apple has steadily made it difficult to jailbreak devices by locking down its hardware and software for security reasons, which it says helps counter malware attacks.

Zimperium CEO Zuk Avraham said the jailbreak is “yet another example that attackers have an edge on iOS vs. defenders,” adding “[Apple] needs to stop the need to jailbreak the device in the first place and should just enable users to have full access without a need to run an exploit.”

Last May, the unc0ver team released a similar jailbreak for iPhones running iOS 11 to iOS 13.5 by exploiting a memory consumption issue in the kernel (CVE-2020-9859). But it was patched by Apple in a matter of days with the release of iOS 13.5.1 to prevent the vulnerability from being exploited maliciously.