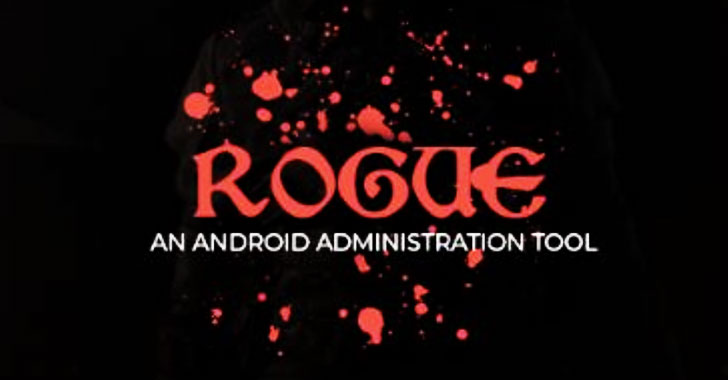 Cybersecurity researchers have exposed the operations of an Android malware vendor who teamed up with a second threat actor to market and sell a remote access Trojan (RAT) capable of device takeover and exfiltration of photos, locations, contacts, and messages from popular apps such as Facebook, Instagram, WhatsApp, Skype, Telegram, Kik, Line, and Google Messages.

The vendor, who goes by the name of “Triangulum” in a number of darknet forums, is alleged to be a 25-year-old man of Indian origin, with the individual opening up shop to sell the malware three years ago on June 10, 2017, according to an analysis published by Check Point Research today.

“The product was a mobile RAT, targeting Android devices and capable of exfiltration of sensitive data from a C&C server, destroying local data – even deleting the entire OS, at times,” the researchers said.

Piecing together Triangulum’s trail of activities, the cybersecurity firm said the malware developer — aside from drumming up publicity for the RAT — also looked for potential investors and partners in September 2017 to show off the tool’s features before offering the malware for sale.

Triangulum, subsequently, is believed to have gone off the grid for about a year-and-a-half, with no signs of activity on the darknet, only to resurface on April 6, 2019, with another product called “Rogue,” this time in collaboration with another adversary named “HeXaGoN Dev,” who specialized in the development of Android-based RATs.

While the 2017 product was sold for a flat $60 as a lifetime subscription, the vendors pivoted to a more financially-viable model in 2020 by charging customers anywhere between $30 (1 month) to $190 (permanent access) for the Rogue malware.

Interestingly, Triangulum’s attempts to expand to the Russian darknet market were met with failure following the actor’s refusal to share demo videos on the forum post advertising the product.

From Cosmos to Dark Shades to Rogue

Rogue (v6.2) — which appears to be the latest iteration of a malware called Dark Shades (v6.0) that initially sold by HeXaGoN Dev before being purchased by Triangulum in August 2019 — also comes with features taken from a second malware family called Hawkshaw, whose source code became public in 2017.

“Triangulum didn’t develop this creation from scratch, he took what was available from both worlds, open-source and the darknet, and united these components,” the researchers said. 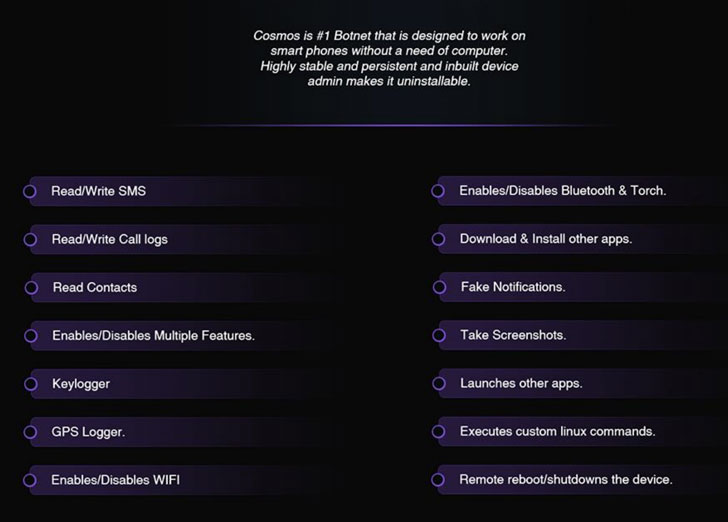 Dark Shades, as it turns out, is a “superior successor” to Cosmos, a separate RAT sold by the HeXaGoN Dev actor, thus making the sale of Cosmos redundant.

Rogue is marketed as a RAT “made to execute commands with incredible features without a need of computer (sic),” with additional capabilities to control the infected clients remotely using a control panel or a smartphone.

Indeed, the RAT boasts of a wide range of features to gain control over the host device and exfiltrate any kind of data (such as photos, location, contacts, and messages), modify the files on the device, and even download additional malicious payloads, while ensuring that the user grants intrusive permissions to carry out its nefarious activities.

It’s also engineered to thwart detection by hiding the icon from the user’s device, circumvent Android security restrictions by exploiting accessibility features to log user actions, and registers its own notification service to snoop on every notification that pops up on the infected phone.

What’s more, stealth is built into the tool. Rogue uses Google’s Firebase infrastructure as a command-and-control (C2) server to disguise its malicious intentions, abusing the platform’s cloud messaging feature to receive commands from the server, and Realtime Database and Cloud Firestore to upload amassed data and documents from the victim device.

Rogue Suffered a Leak in April 2020

Triangulum may be currently active and expanding his clientele, but in April 2020, the malware ended up getting leaked.

ESET researcher Lukas Stefanko, in a tweet on April 20 last year, said the backend source code of the Rogue Android botnet was published in an underground forum, noting “it has lot of security issues,” and that “it is new naming for Dark Shades V6.0 (same developer).”

But despite the leakage, Check Point researchers note that the Triangulum team still receives messages on the actor’s home Darknet forum from interested customers.

“Mobile malware vendors are becoming far more resourceful on the dark net. Our research gives us a glimpse into the craziness of the dark net: how malware evolves, and how difficult it is to now track, classify and protect against them in an effective way,” Check Point’s Head of Cyber Research, Yaniv Balmas, said.

“The underground market is still like the wild-west in a sense, which makes it very hard to understand what is a real threat and what isn’t.”